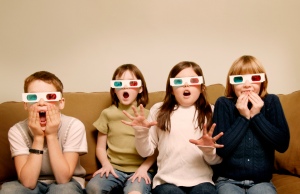 The number of movie theater screens showing 3D films has increased to its highest level ever: approximately 15,000 screens, or four times as many as there were in 2009. Such increases in supply might seem to suggest ever increasing demand. But the truth is a little more complicated.

Although moviegoers initially thrilled at the prospect of realistic, three-dimensional attractions—and gave James Cameron another massive cinematic success when he offered up Avatar—it seems that some of the thrill is gone. In the first half of 2013, North American ticket sales for 3D movies fell by more than 13 percent compared with the same period in the previous year. Summer popcorn flicks, such as The Wolverine and the children’s movie Turbo, earned less than 30 percent of their revenues from 3D sales.

Related industries are suffering as well. The firm RealD, which is the primary supplier of 3D tools and technology to theaters, suffered a $1.5 million loss in the first quarter of 2013.

The disconnect appears to be the lack of novelty. For consumers, once they have seen one far-off land, distant galaxy, or alien battle in 3D, they have little need to see another. Therefore, suppliers are turning to new realms for innovating.

For example, the director of a new a concert film, Metallica Through the Never, not only placed the cameras next to the musicians during a live performance but also gathered impressively high quality sound recordings. Thus viewers will not only gain a visual sense of being at the show but an audio experience of the event as well. Another option is to apply 3D techniques to old favorite films. This fall, viewers can experience the 1939 classic The Wizard of Oz in IMAX theaters, during a one-week run.

Regardless of how consumers are expressing their preferences in their movie theater spending though, filmmakers and theater operators are committed to 3D versions. Hollywood studios have announced that they will release at least 60 3D movies per year through 2016. So when the flying monkeys come, moviegoers had better learn to duck.