With a measured pace, Taco Bell is testing out new ways to welcome customers to its quick serve locations. In select cities throughout the country, the fast food chain is trying out new designs and décor, with a segmented approach that aims to appeal best to local clientele. Depending on the performance in these test locations, it may soon come to pass that your local Taco Bell will be designed with your location in mind, even as it provides consistent food items in every store. 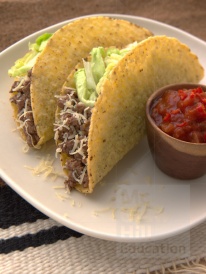 The first experiment was the Cantina design, a layout with open kitchens that appeared in Chicago and San Francisco. Some of the restaurants even added alcoholic options to the menu. Soon thereafter, Taco Bell opened four separate locations in California with four different designs. Orange County thus hosts the Heritage, which uses heavy timber, white walls, and lots of tile in a modern version of a Mission Revival style. The California Sol design provides a “beachy feel” that encourages a laidback vibe. For the Urban Edge design, Taco Bell is attempting to blend the style of various international street vendors. And the rustic Modern Explorer design seeks to appeal to both rural and suburban consumers.

These designs are both nostalgic and competitive. That is, Taco Bell got its start as a California-based taco joint, and several of the designs signal that history. But they also are reminiscent of some of the company’s popular competitors, such as Chipotle, with its slightly more upscale décor.

The company, which is owned by Yum Brands, plans to continue expanding the designs, especially in other urban locations that might match the targeted designs. A recent announcement suggests that Atlanta can expect the new stores soon, as might several smaller metropolitan areas that feature thriving downtowns.

Among its approximately 7000 U.S. restaurants, Taco Bell undertook renovations in about 600 last year, and it plans to continue or increase that pace. Thus, the substantial redesign comes as part of a broader effort to ensure the stores stay updated and refreshed through regular remodeling. The costs of the experimental design efforts are approximately equivalent to those of a traditional remodeling, suggesting that Taco Bell has little to lose financially from its design experiment—unless customers somehow come to hate pendant lighting and distressed wood so much that they refuse to return to the refurbished restaurants.