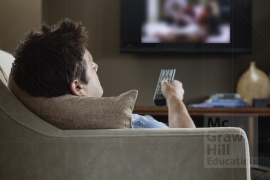 The massive trend of cord cutting, such that many consumers no longer subscribe to cable television services and instead get all their entertainment content from streaming services, was a key motivation for the streaming companies to start producing original content. Hulu, Netflix, and Amazon all host and promote their content, and some of the shows have prompted notable popular and critical attention as excellent options for viewers. But a recent study shows that those viewers instead remain loyal to the shows they have known for years. If all consumers want are Friends reruns, is there really sufficient cause to develop and broadcast Stranger Things?

The answer might depend on the reason for these consumer behaviors, and those reasons are not completely clear. Perhaps viewers are subject to social desirability biases: They know they “should” prefer a challenging, socially relevant, probing series like The Handmaid’s Tale, but what they really want to watch is the comforting procedural storytelling provided by NCIS. Or perhaps they are not at all embarrassed about their love of This Is Us but cannot afford a subscription to cable networks and thus are willing to wait a few days for new episodes to show up on Hulu.

Although these reasons are not totally clear, a few other details about consumer behaviors emerged from the study, which surveyed more than 2000 U.S. streaming customers. That information could inform the streaming services’ efforts at developing new content going forward. For example, 21 percent of those surveyed admitted that they watched entertaining content while at work, so perhaps they would be attracted by shorter storylines that they could consume in between job tasks.

In addition, nearly one-third of the respondents explicitly stated that screen size did not influence their viewing habits, which represents a stark contrast from previous trends that suggested consumers wanted large televisions with stellar picture quality. For some consumers, it thus appears that production values and graphic quality might not be as important, implying a means by which content providers could cut their costs.

Finally, among these streaming users, a whopping 86 percent rely on Netflix, though mainly to gain access to movies. This statistic provides insights for both Netflix and its competitors; perhaps Netflix should shift its content production efforts to more feature-length film content. Hulu and Amazon instead might see a promising niche for their offerings, such that they might attract more fans of television series and leave the movie market to Netflix.