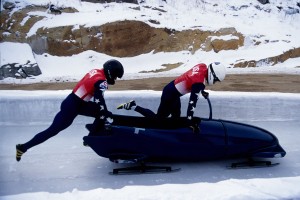 For many sponsors of the Olympics or the teams competing in them, the deal is pretty straightforward: The company provides funding, and in return it gains the right to feature the Olympic logo or a popular athlete’s image on its packaging. BMW has gone so much farther with its sponsorship of the U.S. bobsled team that it may just change the expectations.

For several years, BMW has offered athletes and teams in different sports access to its proprietary software, to help them improve their performance. For example, it applied its software to swimmers’ turns at the end of each lap, showing them how to make the transition more efficiently. It also showed long-jumpers how to get the greatest acceleration from a stopped position.

Such “technology transference” might have shaved milliseconds off a swimmer’s time, but it was not particularly visible to consumers. The 2014 sponsorship efforts will change that, because instead of software, BMW is providing hardware, literally, to the bobsled team. The two-person men’s and women’s U.S. bobsled teams will be racing in BMW-designed sleds this year, hoping that the car company’s expertise with aerodynamics will make the difference at the finish line.

To highlight its participation, BMW produced a full-length documentary film, Driving on Ice. The movie describes the complex design process and the related challenges. It also features well-known names in the sport, such as 2010 gold medalist Steve Holcomb. Although produced by BMW, the documentary is not overtly promotional for the firm.

Instead, BMW leaves that to two Olympic-themed advertisements that will air during the commercial breaks for the documentary. One advertisement reiterates the company’s direct contribution to the bobsled teams. The other makes a broader appeal, highlighting how BMW vehicles help winter athletes plunge through snow drifts and over icy roads to get to practice.

The story that BMW has to tell thus sets it clearly apart from most other Olympic sponsors. Few other companies could claim to have had so much involvement in a team’s potential success. Of course, that also means that BMW is taking a far greater risk than most other companies. If the U.S. two-person bobsleds perform poorly—or even worse, capsize or fail to finish the race—BMW will have put itself on the hook and be forced to take responsibility for the failure as well.

Source: Andrew Adam Newman, “Hey, Is that a BMW Racing Down the Bobsled Course?” The New York Times, January 2, 2014