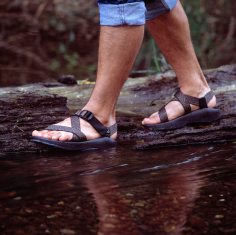 Hippies wear them. Rebels, dropouts from conventional consumerism, flower children—all images traditionally associated with Birkenstocks, the clunky, cork-soled sandals that have been issuing forth from German factories for 240 years. Although the company has introduced a few variations, such as a clog or rubberized straps, the look of a Birkenstock is immediately recognizable and little changed from its initial iteration.

All these features suggest it is a poor candidate as a fashion product. Rather than changing every season, the shoes have stayed largely the same. Rather than focusing on the appearance of the offering, the product design stems solely from considerations of comfort and orthopedic safety. Furthermore, they continue to be made in relatively expensive German factories, rather than having production shipped overseas to lower the costs.

Considering these factors, it seems deeply strange that Vogue has called Birks “sexy” and Glamour named it the shoe of the summer recently. Explanations for this emergence are varied and unproven. One fashion blogger explained that after years of wearing only uncomfortable, tight, high-heeled shoes, slipping on a pair of Birkenstocks was a life-changing experiment in comfort, so she could not imagine going back. Other fashion leaders, including Manolo Blahnik—known for his sky-high heels and painfully creative shoe designs—have offered their endorsement, asserting that as long as the wearers have nice toes and a good pedicure, the sandals can look nice.

The shift certainly did not result from a conscious effort by Birkenstock though. Rather, it caught the company somewhat by surprise, because it had been doing business the same way it had for more than two centuries. It has a virtually nonexistent marketing budget, does not advertise widely, and did not pursue the endorsements it has received from fashion trendsetters. Its CEO asserts that the popularity is a reaffirmation of a basic, and seemingly outdated, marketing lesson: Build a great product, and people will seek it out on their own.

And they certainly are seeking it. Birkenstock’s sales have grown by anywhere from 40 to 50 percent in different regions of the world, and it estimates that it will sell 20 million pairs annually by 2020. That’s a lot of toes to show.

Considering its recent popularity, can Birkenstocks be considered a fashion product?