How has Sketchers—the little brand with the cool logo—posted such massive recent growth, such that it is striking fear in the executive boardrooms of the big athletic brands? The short answer is its stellar marketing strategy. Consider some elements. 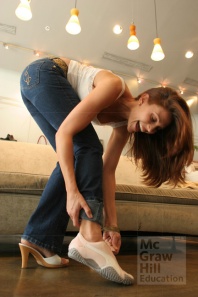 First, Sketchers targets its marketing efforts at teens and children. Hiring popular spokespeople such as Demi Lovato and Meghan Trainor, it sparks these young consumers’ interest and desire for its trendy products. The children request purchases by their parents, who might be tempted to grab a pair of shoes for themselves as well. Furthermore, this target market is appealing and continuous: It is made up of consumers who literally must have new shoes, as they outgrow their previous pairs.

Second, Sketchers continues a steady pace of international growth, enabling it to establish footholds in various markets. Some of its most recent entries include Nigeria and the Czech Republic. Accordingly, it predicts that by the end of 2015, it will have opened approximately 1,250 stores around the world.

Third, its price points continue to be lower than those of many of its competitors. This positioning is particularly effective because many consumers buy Sketchers less for athletic pursuits than for everyday wear. Even though it maintains that its shoes support athletic efforts and games, Sketchers really is more of an “ath-leisure” brand, enabling consumers to wear comfortable gear as they go about their regular days, rather than focusing on their exploits at the gym.

As a result of this strategy, Sketchers’ sales grew an astounding 36.4 percent in a recently reported quarter. Its market share in the United States accordingly has grown to 5 percent—still way behind the market leader Nike, which owns 62 percent of the market, but enough to surpass adidas, which accounts for 4.6 percent of the market. No wonder these traditional competitors are growing bit nervous.