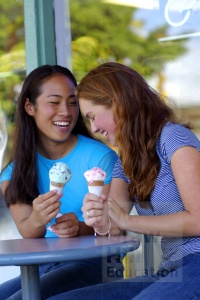 In the current presidential administration, tweets are a prominent form of communication. The President’s criticisms of Nordstrom attracted substantial attention, but he isn’t the only one with a mobile device and a Twitter account. Well before he became the press secretary, Sean Spicer took to the microblogging site to complain repeatedly when the ballpark ran out of vanilla-flavored Dippin’ Dots during a Nationals game. At the time, there was little controversy; Spicer was not a famous name, and though the tweets were rather odd, they were not particularly notable.

That all changed when he was appointed press secretary and people began to look for information about him. The odd series of tweets about Dippin’ Dots, in which he predicts the company’s demise based solely on a particular flavor being out of stock at a single ballpark on a specific date, quickly attracted people’s attention. Soon, both Spicer and Dippin’ Dots were trending, forcing the company to issue some sort of response.

But the situation was delicate. Dippin’ Dots did not want to engage negatively, nor did it want to be caught in the political cross-fire. Yet it believed that it could not simply ignore the reawakened discussion or fail to respond. Even if the tweets were old, people were talking widely about the company and its products, and if Dippin’ Dots simply remained silent, that would be a form of response too.

Instead, it crafted an open letter to Spicer, from the company CEO, using levity and gentle reminders of its status as an employer of members of the American workforce, to defuse the potential damage of the situation. The letter apologized for running out of vanilla at the Nationals’ stadium, described the success of the company, and asked for permission to host an ice cream social at the White House. The lighthearted humor nearly demanded that Spicer take the situation a little less seriously; accordingly, he responded via Twitter the next day, proposing that the ice cream should be given to first responders instead of White House staffers. The discussion went viral of course, shared by millions of consumers who appreciated the tone of the response.

Thus the company came out ahead: Its name was trending for days, and its corporate image for silly fun was burnished. Furthermore, it made sure that Sean Spicer was unlikely to lodge many more strange complaints about it.