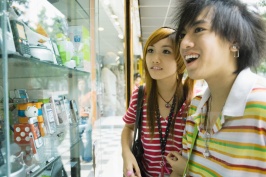 China has something of a reputation as the place to find, sell, and buy counterfeit versions of some of the most popular consumer goods, from copies of luxury brands to fake versions of popular toys. But as Chinese consumers’ purchasing power grows, the counterfeit market is feeling the pressure from growth in authentic products.

For example, sales of licensed entertainment products have grown by 30 percent in China. Previously, consumers often sought inexpensive knock-off versions of shirts, hats, and bags with their favorite characters. As their ability to buy higher quality, authentic versions of those same items grows, many of them are coming to appreciate the benefits of paying a little more.

In addition to their growing buying power, these shifts reflect the increasing access that Chinese consumers have to popular Western media, in the form of movies and television shows. For example, the box office proceeds for all of China were $2.7 billion in 2012; today, they have jumped to a whopping $6.6 billion. In response, there are 25 Simpsons-themed stores to meet demand throughout China. They compete for revenues with the world’s largest Disney store, which is in Shanghai.

Still, this is not to suggest that counterfeit products have disappeared. Although there are no clear numbers, estimates suggest that counterfeit goods make up a nearly $300 billion market. Counterfeiters also are savvy, such that they may simply up their quality just a little, enough to satisfy the increased quality demands of consumers, and still make money.