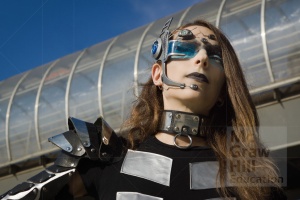 Comic-Con was once a refuge for nerds and geeks, interested in interacting with others to share stories about their intense fandom for science fiction and fantasy culture. It isn’t that anymore, as the latest iteration makes utterly clear. Instead, it has become a marketing juggernaut that few popular culture content producers or participants can afford to ignore.

Nor can they just “phone in” their marketing efforts. Nearly every show, movie, or graphic novel with a dedicated fan base hosts some sort of event in San Diego’s crowded convention center, including panel discussions with creators, autograph sessions with actors, and so forth. To stand out, producers today need to make a bigger splash, by giving the estimated 167,000 consumers who attended the latest Comic-Con an experience that they will both appreciate and remember.

For example, to promote its new series The Tick, Amazon built a pavilion alongside the convention center hosting Comic-Con, in which a massive, blue, 20-foot, animatronic head waves its antenna at guests. To bring them to the pavilion, Amazon also dressed actors in Tick costumes and sent them into the streets to interact with visitors.

The Blade Runner 2049 marketing stunt also located its operations outside the main convention hall, in a 12,800-square-foot exhibit that recreated the futuristic streets of the upcoming film. The neon-filled scene featured props from the movie, a virtual reality experience, and actors in costume. Visitors thus felt as if they were actually visiting the dystopian future of Los Angeles.

If instead they wanted to visit the dystopian theme park featured in HBO’s series Westworld, they could visit yet another secret location, after registering to take part in the experience. The registration provided the address, and once they arrived, hosts (similar to the robots who allow visitors to live out their fantasies in the show—except real, in this case) welcomed the visitors to what was intended to feel just like being in the show. In addition to a psychological assessment to gauge visitors’ interests, the Westworld experience featured a saloon with a bartender serving drinks, along with cowboy hats for everyone, of course.

Such experience marketing represents a response to consumers’ clear demands. They want access to every facet of their favorite shows, and if producers want to remain among the list of favorites, they need to find ways to provide them with experiences that grant them just that.