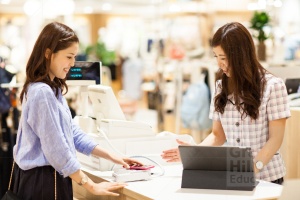 Long a familiar anchor store in malls across America, JC Penney more recently has floundered, cycling through three CEOs in seven years and failing to post any profits in 15 of the past 17 quarters. After two failed overhauls, signaling somewhat desperate efforts to bounce back from the global recession, JC Penney has landed on what it identifies as the winning strategy: Scale back efforts to appeal to Millennial consumers, stop working to expand its home appliance division, and shift its focus back to winning over its original core customer base of older women seeking discounted fashion apparel.

To accomplish, JC Penney has hired a new CEO with apparel experience, tasked with reorganizing stores to highlight fashion brands such as Liz Claiborne, Worthington, and St. John’s Bay by placing them in the line of sight of prime customer traffic. It also will need to eliminate or scale back future purchases of brands intended to appeal to Millennial consumers. By working with designers such as Liz Claiborne, it hopes to develop exclusive offerings, available only at JC Penney stores, as well as sell the brand’s new product lines in advance of competitors that also stock general products from the company.

Established in 1902, JC Penney reached a peak in the 1970s, and it continued to demonstrate strong performance, at least until the modern global recession. As it struggled to weather the crisis, the company exacerbated its problems by making several regretful, notable missteps.

First, it tried to eliminate sales in favor of always having low prices. But consumers missed the excitement and fun of getting a great bargain, so the chain was forced to eliminate that practice and bring back sale prices almost immediately. Second, the previous CEO added to the retailer’s woes. Sensing an opportunity in the market following the closure of several Sears Holding Corp. stores, the chain debuted a new focus on appliances. However, with lower gross margins on appliances, JC Penney’s revenues sank, and the company underperformed during fourth quarter of 2017 and first quarter of 2018.

With an average of 40 percent gross margins on apparel and a projection that the apparel industry will post its strongest sales gain since 2012, JC Penney’s present strategic shift seems to offer good promise for finally getting the retailer back on track. The company hopes that by once again appealing to its core consumer base, moms and older female shoppers will no longer consider it an afterthought.