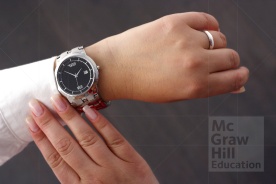 Four guys walk into a shop … and make watches. It sounds like the start of a joke, but the Icelandic luxury watch brand JS Watch Company is doing most of the laughing. The expensive, prestige watches feature premium prices and limited releases, but rather than a traditional or stuffy approach to their design and sales, the owners embrace a quirky and entertaining philosophy that sets them far apart from most watchmakers.

The difference is apparent in nearly every aspect of the business, including its production facilities, product designs, and advertising. In particular, all the 500 or so watches it makes each year come from a tiny workshop, tucked into an approximately 270 square foot showroom. The jovial and charismatic master watchmaker designs and produces many of them, and his son makes the rest. Their two partners take care of marketing and other operational requirements. A sign outside the door designates the location as being the home of “Probably the world’s smallest watchmaker.”

In designing the company’s other marketing communications and advertising, the small firm has shied away from conventional glamor shots of watches. Instead, the campaigns feature the four partners in silly, tongue-in-cheek situations, often dressed in costume. To promote a waterproof version, the master watchmaker similarly dressed up, as an astronaut, and paraded through the streets outside the workshop.

This space-themed design is not the only unique offering. The watch designs tend to denote some fun scenario, and they consistently refer to Icelandic heritage and achievements. When the nation’s soccer team, remarkably, made the World Cup for the first time, JS Watch Company issued a timepiece with a soccer ball on the face and a red “12” marker, to refer to the popular designation of fans as the twelfth member of the team. A flight-oriented version celebrates the country’s airport; a highly sophisticated dress watch gives a nod to Reykjavik’s famous 101 neighborhood.

Some traditionalists scorn such offerings, regarding them as too silly and not sufficiently sophisticated to be included among the ranks of luxury watches. But JS Watch Company does not take such criticisms too seriously, noting that it regards its designs as stylish and simple, such that everyone has the potential to become a “classic.” It also points to famous fans who have embraced the watch, running the gamut from the guitarist for Jethro Tull to Tom Cruise to the Dalai Lama.

The point on which it does not differ much is the pricing strategy. Even if the advertising contains jokes and the watches give a nod to current events, the prices charged are equivalent to those required by some of the most famous names in watchmaking. The most expensive, which requires a custom order, is priced in excess of €12,000; its dial is made up of ash released from an eruption of the Eyjafjallajokull volcano in 2010. The price and production process thus clearly establish the luxury status of the brand—even as the pictures of the founders in bathing suits and silly caps insist on the silly side of the brand’s image.

Source: Penelope Colston, “In Iceland, Watchmaking with a Sense of Humor,” The New York Times, January 16, 2019