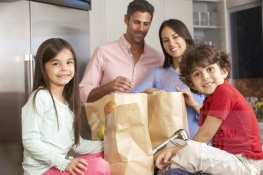 The grocery delivery market continues to grow, albeit somewhat slowly. But a new addition to the service process may make it easier and more efficient for both retailers and shoppers. In a pilot experiment, residents of Scottsdale, Ariz., can place an order with their local Fry’s grocery store and receive their groceries at their door from an autonomous, driverless delivery vehicle, developed and maintained by a company called Nuro.

The vehicle itself is tiny—more like a big cart than a car. Its top speed is 25 miles per hour, and it is programmed to stick to smaller back roads and less travelled throughways to reach its destination. But it does not require any human resources, in the form of a driver, and with their small size and weight, the Nuro vehicles are relatively inexpensive to operate.

The test run is in Scottsdale for a reason. The area is marked by mild temperatures and weather conditions. Accordingly, other companies have designated it as a good test spot for their autonomous vehicles, such that local residents have gained some familiarity with the sight of a car without a driver pulling up alongside them.

In about half a year, Nuro vehicles have successfully completed approximately 1000 deliveries, running for 13 hours per day, every day of the week. According to data from the tests, many of these deliveries involve repeat customers, indicating that the service is sufficiently valuable that people continue using it over time, rather than just testing it out for the novelty. One customer, a parent, noted that the ability to restock her kitchen without having to pack up her young children in the car would make the service extremely worthwhile, especially if she had come down with a cold or other illness. Noting these appeals, the company has ambitious plans to grow, though it has yet to announce where its expansions will spread next.

Source: Lorraine Longhi and Ryan Randazzo, “Self-Driving Robots Can Deliver Your Groceries from Fry’s in Scottsdale,” The (AZ) Republic, January 24, 2019