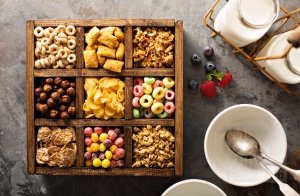 Strict rules exist for what food companies can claim with regard to the fat, calorie, cholesterol, and sodium they contain. The standards are clear and well-established, so when a package on a store shelf promises that the food contained within is low in fat, consumers know that the amounts are less than that threshold. But no such clear guidelines exist for sugar, meaning that manufacturers have a lot more leeway for making rather questionable packaging claims—though that status might be changing.

Critics and health experts, noting that sugar consumption represents a prevalent and increasingly recognized health concern, allege that phrases like “lightly sweetened” or “healthy” should not appear on foods that contain so much sugar that one serving would account for about half of the person’s recommended daily allowance. For example, Honest Tea contains 25 grams (or about 6 tablespoons) of added sugar, yet its label refers to the beverage as “Just a Tad Sweet.”

From the manufacturers’ perspective, such phrases are legitimate. They refer to the taste of the food or beverage, without making explicit claims about the precise amount of sugar contained in them. As the maker of Grape Nuts and other cereals, Post even countered complaints by asserting that it had a First Amendment right to promote its products as healthy. Furthermore, regardless of the marketing phrases featured on product packaging, all foods must provide a nutrition label, so consumers arguably can find the sugar content easily.

Yet the ubiquity of questionable health claims, as well as the potential for creating consumer confusion, largely lead critics to reject these arguments by food manufacturers. They assert that using health-related terms, especially with regard to sugar content, represents a deliberate attempt to mislead consumers. In some cases, juices, granola bars, and other products that claim to be lower in sugar actually contain more than competitive offerings that do not market themselves according to this consumer health benefit. Another potentially confusing tactic instead relies on different language to refer to sugar, such as calling it “organic dehydrated cane juice solids.”

A likely outcome will be increased enforcement and new standards from the Food and Drug Administration. Lawsuits against the companies are continuing, and evidence of the harmful health consequences of excessive sugar consumption also continues to mount. After settling a class action lawsuit for $20 million, Kellogg’s agreed to remove terms like “heart healthy” from its Raisin Bran boxes. But another lawsuit against General Mills was dismissed, after the judge determined that the nutrition label provided sufficient and accurate information for consumers to use. For now, it may be up to consumers to take responsibility to read the whole package, not just the claims on front.