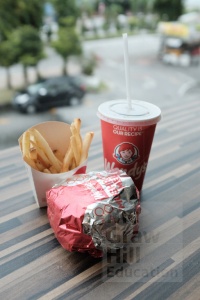 As a key distinction for its offerings, Wendy’s has always highlighted its use of fresh beef in its burgers, comparing itself with competitors like McDonald’s or Burger King that rely on frozen patties. The company claimed that this commitment to using fresh meat ensured better quality hamburgers, and it reinforced that claim over and over again, as famously summarized in its “Where’s the Beef?” advertising campaigns.

But the difference also meant that when the beef supply chain was disrupted by the implications of COVID-19, Wendy’s was the first fast food chain to face massive shortages. Whereas the other chains could pull frozen patties from their warehouses—which hold substantial amounts of inventory, according to one industry observer, who noted there was no true meat shortage—fresh meat was harder to find. It cannot be stockpiled, so when the supply chain stopped producing, Wendy’s had no inventory on hand to keep restaurants fully supplied. At the national level, an estimated 20 percent of orders for Wendy’s burgers thus have been going unfulfilled.

These effects arose because the spread of the coronavirus required the shuttering of many meat processing plants. Infection rates were particularly high in these settings, which involve closed plants and represent a high risk, because they are central to people’s food supply. When the mandatory closures were enforced, meat production declined by approximately 35 percent, compared with average levels.

Those constraints have persisted for several weeks; in this supply chain, it usually takes about three weeks for the slaughtered cattle to be processed and reach grocery stores or restaurants. Thus, the effects took several weeks to reach consumers, and they appeared to vary across regions. Wendy’s outlets in the Northeast were far more affected than those in the Southwest; no restaurants in Nevada or Arizona ran out of stock, for example. But as the shutdowns continue, these stockout scenarios may become more widespread.

Some grocery store chains such as Kroger and Costco have started to impose purchase limits on fresh meat, requiring families to purchase no more than four packages per trip. Wegmans tells customers that they should not expect to be able to get every cut of meat they might want.

Furthermore, even the restaurant chains that use frozen patties are noting some fluctuations in prices. That it, they can get what they need to supply their stores, but doing so costs them significantly more. The uncertainty is affecting other fresh meat supply chains too, including those for pork and poultry, leading Tyson Foods to warn that “the supply chain is breaking.” Still, there may be light at the end of the tunnel; some processing plants have already reopened, and many retail executives believe that any shortages they have experienced will be temporary—unless of course the pandemic resurges.

Source: David Yaffe-Bellany and Michael Corkery, “A Wendy’s with No Burgers as Meat Production Is Hit,” The New York Times, May 5, 2020; George Anderson, “Customers Ask Wendy’s ‘Where’s the Beef?’,” Retail Wire, May 6, 2020