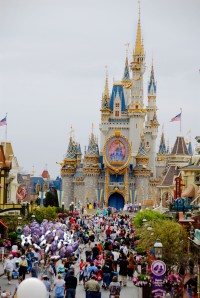 The price to get into Disneyland, in Anaheim, Calif., just increased by $5, to $92 ($86 for children). The price to get into Disney World, in Orlando, Fla., already was $95 ($89 for children). At Universal Studios Hollywood, a one-day pass is $80. But instead of just raising its prices to match Disney, Universal has introduced a new pricing plan that offers greater access to those willing to pay more—quite a lot more.

The VIP service at Universal allows park visitors to bypass every line in the park, after having their car parked by a valet. They get free breakfast and lunch in a luxury lounge, serving scallops and short ribs, for example. Then they can access the backlots, while toting their free gift bags with mints, hand sanitizer, and a poncho to wear on water rides. All this, at a cost of $299 per ticket. For those who don’t worry about their breath or eating fancy meals, a $149 option instead offers just line-jumping privileges.

Even as it introduced this new service, Universal noted that it had no plans to expand its primary offering. That is, it did not plan to open any new rides or attractions this year. Its parks pulled in approximately 20 million people in 2012, which represented a nearly 20 percent increase over the year before. And according to some of these visitors, without a VIP option, they simply would not attend, because they hate dealing with the crowds.

Such benefits raise some questions about the economic stratification Universal is promoting, such that only the wealthy get to enjoy all the perks. For Disney, concerns about damage to its “magical” image have halted it from classifying different price points for tickets. Yet as a recent controversy—in which wealthy families hired disabled people to join their trips so that they could skip lines—showed, demand for such special treatment exists.

Even though theme parks are enjoying record attendance and revenue levels, they keep looking for ways to increase their appeal. New rides and attractions are expensive, and in many cases, they seem out of date pretty quickly. In this case, the magic may be in the pricing.