It isn’t everyday that a luxury jeweler is linked to charitable micro-funding initiatives. But in its efforts to connect with younger consumers, the high-end jewelry brand David Yurman has taken a creative new approach and partnered with the charitable app Elbi—which itself was founded by one of the models who appears in some of David Yurman’s marketing campaigns. The outcome promises to benefit the brand, the charity, and consumers and beneficiaries of the charitable efforts.

First, David Yurman can connect better with millennials, in a new and innovative way, thereby building brand recognition in an age group that typically lacks enough discretionary income to purchase fancy jewelry. The resulting, recognizable brand image also is based in social philanthropy. That is, by introducing itself to young consumers through its partnership with Elbi, David Yurman can expand its socially responsible image. The brand has selected seven specific causes, all associated with children’s charities, that it will support in conjunction with this particular brand partnership. 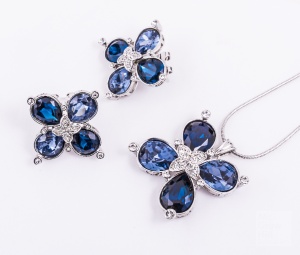 Second, for Elbi, the connection increases attention and clicks on its site. The social sharing approach seeks to generate micro-donations through clicks, which then go to support three different charities each day. Through the partnership, David Yurman promised to contribute $1 for each transaction on its website, as well as donating a bracelet that users could win.

Third, with each donation or activity, users earn points that they can redeem for luxury prizes, including handbags and electronics, as well as the exciting jewelry. Millennial shoppers can sense that they are doing good through their consumption, fulfilling their need to contribute positively to the world, even if they cannot afford to make a monetary donation themselves. In turn, the charities associated with the app receive more support, which goes to their intended audiences.

To promote this new partnership between Elbi and David Yurman, the marketing campaign features the model who also founded the Elbi app. It embraces the socially responsible notions of togetherness and family, showing both adults and children playing and enjoying life, adorned with the brand’s jewelry. With this whimsical approach, the marketing links clearly to the seven causes selected by David Yurman as recipients of the benefits of the partnership, all of which have an emphasis on helping children. Finally, by airing the resulting spots in traditional channels, as well as movie theaters and on the brand’s social media sites, David Yurman hopes to capture the attention of younger consumers, ensuring that their first impression of this luxury brand is a positive one.